Cover bearing a special postmark 12.12.12. This special date pattern, when all three numbers in a date are the same, won't occur until after 88 years. 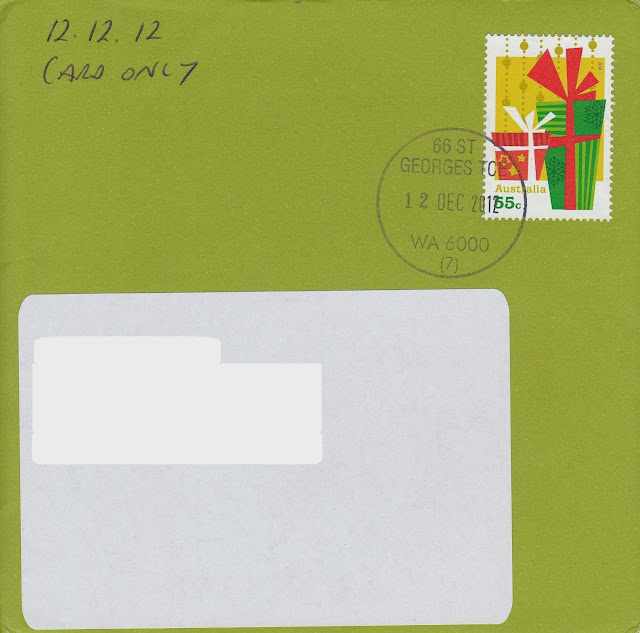 ﻿
Stamp used on the envelope is from the 2012 Christmas series issued on November 1, 2012 depicting both religious and non-religious themes. The non-religious stamps show Rudolph and presents (local card rate 50c) and bells (local mail 60c) while the religious ones show The Adoration of the Magi from a wool and silk tapestry in the Art Gallery of South Australia - local card rate (55c) and international card rate ($1.60).

Email ThisBlogThis!Share to TwitterShare to FacebookShare to Pinterest
Labels: Oceania

One of the cover exchanges I joined was for a Christmas themed cover and this is what I received from Canada. The postmark of Christmas Island makes this cover more interesting and theme focused. I'm really chuffed that the sender made a special effort to have this cover postmarked at Christmas Island. 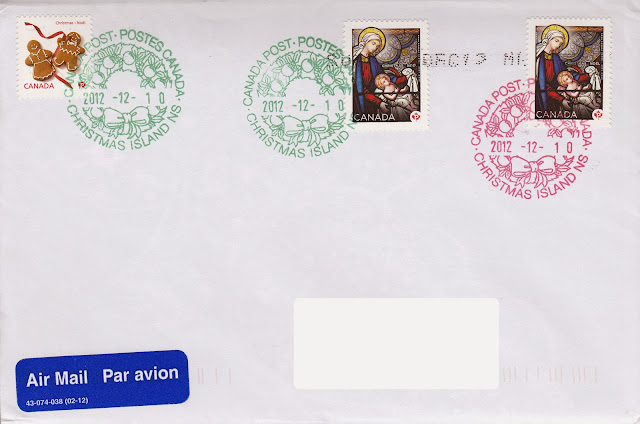 For 2012, Canada Post issued the Permanent domestic rate stamp above on October 15, 2012. This traditional Christmas stamp features the image of the Madonna and Child in stained glass is from one of the stained glass windows at St. Mary's Immaculate Conception Cathedral in Kingston, Ontario.

On the same day three other Christmas themed stamps were issued featuring gingerbread cookies for Permanent domestic, US and International rate stamps.  . 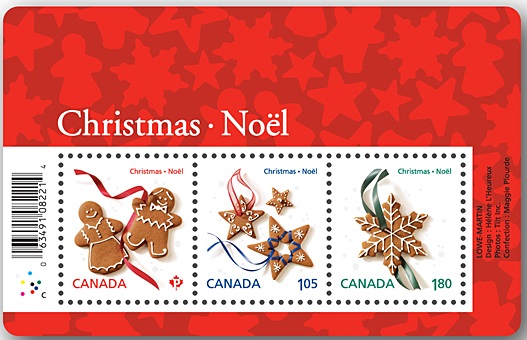 Did you know that the stamps above are enhanced with augmented reality? You can download a free StampsAlive app, hover your phone over the domestic permanent stamp with your device and choose from several decorating ideas. A good way to entice kids to stamp collecting!
Posted by imstamp at 01:38 No comments:

This beautiful Christmas cover came from Radim. He always manages to send covers with special postmarks or from special places. 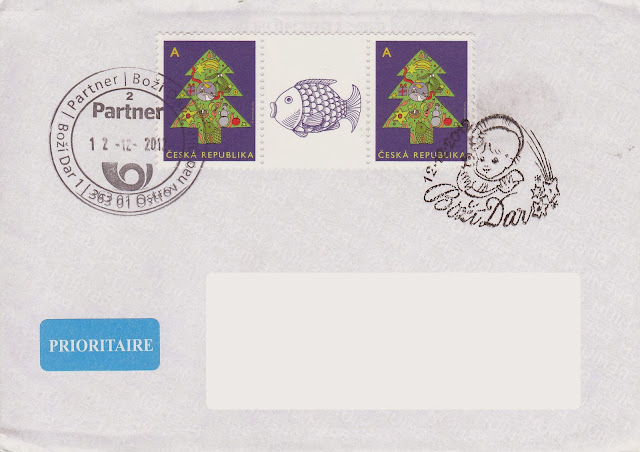 Radim used two self-adhesive permanent rate "A" stamps issued on November 7, 2012. The postmark is from Bozi Dar, a town in the Karlovy Vary Region. The name translates to Gift of God. This is one of the places known for having a Santa's Post Office.
The cover above also has a 12.12.12 postmark.
Thank you Radim.
﻿
Posted by imstamp at 01:38 No comments:

What started me on this hobby of collecting covers is discovering the varied and interesting places all over the world.

The cover below is an example of this - a Christmas themed cover with a special postmark from Santa Claus, Indiana. 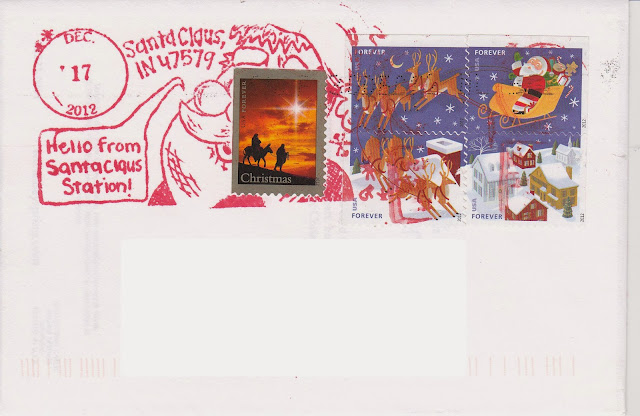 Yes there is such a place as Santa Claus in the US. Apparently the town of Santa Fe, established in 1854, was denied its application for a post office since there was already a Santa Fe recorded with USPS. A town meeting was held and the townspeople elected instead to rename it as Santa Claus.
It is the only post office in the world to bear the name and as such receives thousands of letters to Santa from all over the world. Every year a Christmas pictorial postmark is chosen from designs submitted by art students from Heritage Hills High School.
On the cover are two stamp issues from October 2012. The first is a Forever stamp (45c) depicting the flight of the Holy Family to Egypt. Interestingly enough, this stamp was unveiled at the Bethlehem Chapel of the Washington National Cathedral.
The second stamp is actually a composite of four self-adhesive Forever stamps featuring Santa and his sleigh circling around snow-covered rooftops.
Posted by imstamp at 01:37 No comments:

Not a country I usually get a cover from so this one definitely belongs here. 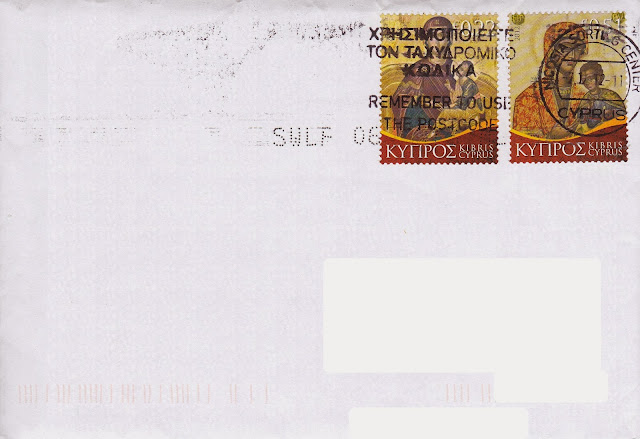 Cyprus issued commemorative sheet (EUR0.68) and two stamps (EUR0.22 and EUR0.51) on November 14, 2012 in time for the holiday season. All the stamps depict the Virgin and Child. These icons were on exhibit at the Byzantine Museum of the Archbishop of Makarios III Foundation.
Posted by imstamp at 01:36 No comments:

Argentina issued one stamp for the Christmas season on November 17, 2012 . The ARS3 stamp illustrates the traditional Birth scene made of clay and minerals extracted from the hills of Purmamarca. The same illustration can also be seen on the envelope and the stamps have been cancelled with a special Christmas postmark which I think shows a Kolla woman and child. 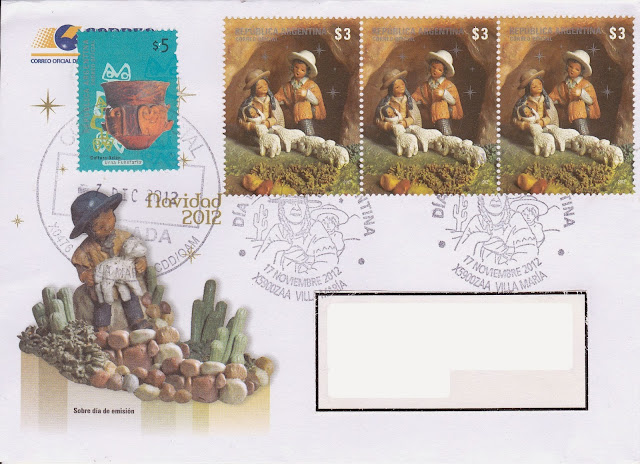 The other stamp used to make up the postage is from the Argentine Culture set issued on August 30, 2000. Comprising of ten stamps ranging in denomination from 10c to ARS9.40, each of the stamps show artefacts from the different cultures that make up the people of Argentina. The one above is of a funerary urn from the Belen culture.
Posted by imstamp at 01:08 No comments:

On the theme of Christmas, an exchange partner from Croatia sent this cover to me. 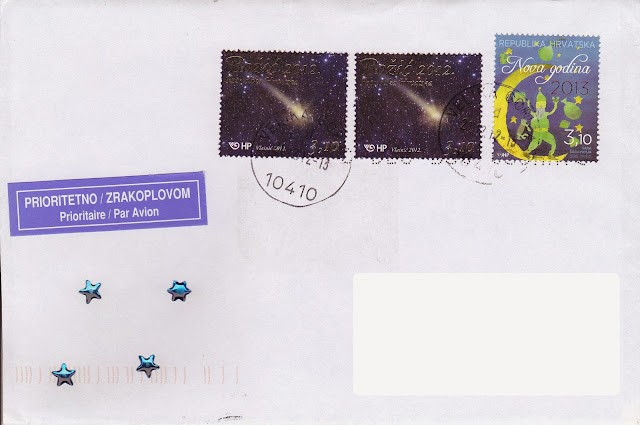 On the cover is a stamp  (issued November 15, 2012) illustrating the star that guided the Three Wise Men to where the Holy Child was born and a New Year stamp issued on December 4, 2012. The illustration for the New Year stamp was done by Sara Saravanja, a 7th form pupil from Slavonski Brod who was one of the many students who were asked draw how they see Santa. She drew Santa lighting the star system and lots of presents as a desire for abundance in the new year.

imstamp
A worldwide stamp collector, I always save envelopes with nice clear postmarks. It makes me wonder where the place is and what interesting things I would see there.